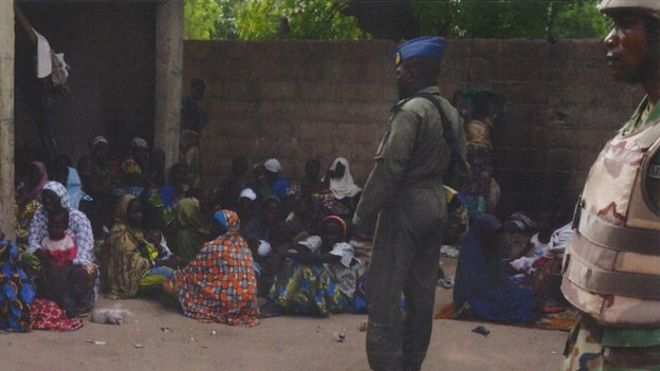 More than 200 women and children were “freed from the Islamist extremist group Boko Haram in Nigeria on [May 2, 2015].” Of those, many were children and a large amount of women were pregnant. Health screenings and psychological counseling for the rescued women were provided by the Chief of the United Nations Population Fund. Health professionals are pondering whether former captive women and children can reintegrate back into society or “reclaim [their] life.” Dr. Theresa Betancourt, director of the Research Program on Children and Global Adversity at Harvard’s T.H. Chan School of Public Health, studies this very question of how children affected by hardship reintegrate back into society. She led a 13-year study with 529 former child soldiers held captive in Sierra Leone and is applying her findings to discover the “problems the Nigerian girls might face and the support they will need.” as discussed in an interview with NPR (National Public Radio). She believes that Nigeria is tending to the needs of the girls both on the physical and mental side. In other words, “they’re attending to pregnancy care but also immediate psychosocial care.” Although, she does have concern that many of the pregnancies are “in the context of abuse and rape and are unwanted.” Thus, one has to worry about maternal depression which, in turn, prevents a mother’s ability to fully nurture the child. Mentorship and support on “taking on the role of [being a] mother” will be needed for these girls.”

When NPR asked Bentancourt on the how long emotional scars last on trauma victims, she responded that factors include “how they were treated in captivity, exposure to traumatic events and many post-rescue factors.” Emotional scars are also greatly influenced by the social community they return to. In Sierra Leone for example, child soldiers are “taunted and teased or even beaten.” “Perceptions of sexual impurity” make it extremely difficult for the girls to feel welcomed back into their community. That is why social support is crucial to “reduce stigma” because if former child slaves are singled out, it will “greatly exacerbate negative outcomes.” As a result, Bentancourt emphasizes that community sensitization campaigns, like those in Sierra Leone, are important. These are “town hall-style meetings,” consisting of parents, community elders, and other people, that prepare the community for “the return home of former child soldiers.” Dialogues are presented to assist “the immediate family of those returning as well as their social group to accept the captives back home” and warn them about the “danger of ostracizing.”

Bentancourt’s research has shown that there are girls that go on and “reclaim their lives” after going through horrific experiences. She told a story of a girl who had been unmercifully beaten for 2 ½ years, which resulted in a deformity on her leg in addition to have a baby a young age. Having witnessed various “killings and atrocities”, she had trouble getting along with peers.” Although with a dedicated mother and flexible teacher, she was able to establish connections within her school and the community. Eventually, with family support, she cared for her child on her own and “became a dedicated student.”

Bentancourt explained that Sierra Leone has opportunities to help girls such as the one mentioned earlier by “continuing in their education, having adequate social support and lower levels of community stigma.” When NPR asked if Nigeria had the same support, Bentancourt expressed that they do have “a health system that is higher functioning than many other areas where children have been involved with armed groups” along with mental health experts. It is through these resources within the state, family, and community members that create hope for trauma victims coming back to their community. Most importantly, it is the connections that trauma victims have with each other that heal emotional wounds inflicted by enslavement.

This image can be found in an article entitled “Boko Haram: Nigerian army ‘frees another 234 women and children’” at bbc.com. [Accessed 9 May 2015]