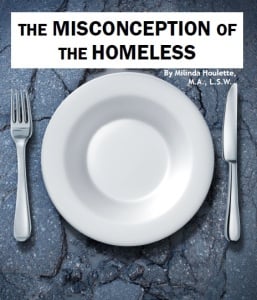 In today’s society, the media and the overall public persona displayed when discussing homeless individuals is that of people who are addicted to a narcotic or alcohol, and who therefore could better themselves if they only tried. Would you consider a child capable of being part of this community? Or a woman with two children, who is employed as a nurse’s assistant at a nursing home? What about a newly discharged veteran from the recent wars?

All of these people and others are part of the current homeless population crisis. In my district alone, which is a fairly small area in regards to population, there are over 100 children in our schools who are homeless and who relocate from day to day to various homes in order to have a place to sleep. Shocking? It should be. This is not what President Lyndon B. Johnson envisioned being possible when he instituted the assistance programs of the 1960s. Another President, Franklin D. Roosevelt, stated plainly, “The test of our progress is not whether we add more to the abundance of those who have much: it is whether we provide enough for those who have too little.”

Many locations refuse to include the children as a part of the homeless population in their Point in Time surveys, as they ‘have a place to sleep.’ However, if a child does not know at which place they will sleep, then this is not the normal lifestyle of a child in elementary school; this is a homeless child. It also places an undue stress on the child, which impacts their learning potential. Likewise, the nurse’s assistant would not be included in the homeless population, even though she and her children live out of their car as her wages are not enough to pay for utilities, rent, and food. As we have seen in the unemployment statistics, the failure to include these homeless individuals in the statistics provides only a portion of the true numbers.

Read the rest of the article HERE.

Milinda Houlette, M.A., L.S.W., is a Licensed (Bachelor) Social Worker with Legacy Hospice of North Arkansas. She has experience in working with the homeless population, and has been part of several Point in Time surveys, expanding one for her research thesis for her Master of Arts in Gerontology. She is currently active in providing homeless assistance to the population in north Arkansas. She is also active in Native American crafts and traditions, and has been an elder for an intertribal association for many years. Milinda is an editorial advisor in the Department of Culture, Policy & Law Enforcement for Cancer InCytes magazine.